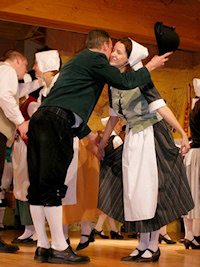 Record of achievements : Masuis and Cotelis folk dance group over the world

The varied repertoire is composed of most traditional Walloon dances. Some were of course taken from Wandembril’s manuscript, a fiddler native of Jambes (1778). Others belong to faiths and costumes deeply ingrained in the collective minds. For example, polka was considered to be cursed for causing the potato disease.

« Le Branle de Mariembourg » also called « Danse du bouquet » is a dance of historic significance : when the army led by Louis XIV returned to France after the siege of Namur in 1692, they stopped in Mariembourg. The young people in the village had to perform that dance in front of the king and his court.